Where they stand — How Europe talks about the Israeli-Palestinian conflict 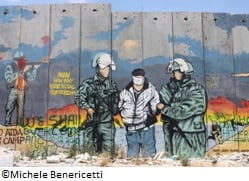 As a linguist, what interests me about political debate is not just what people say. I am also interested in how they say it and what they don't say. These features can reveal the positions from which they express their views and thus where they stand not only on the issues involved in a conflict but also in relation to the parties involved — not so much where they stand as where they sit.

Listen to debates and arguments regarding the Israeli-Palestinian conflict in the European media carefully and what you will hear, almost without exception, is a perspective that is firmly Israeli. Regardless of explicit opinions of right and wrongs, of where the blame is laid and what should be done — crudely, of which 'side' a contributor to the debate chooses to take — it is to Israel (and not Palestine) that s/he presumes moral proximity. This viewpoint entails 'natural' rights and responsibilities for the Israelis but rights which can only be 'granted' to Palestinians, who are thereby absolved from responsibilities.

Three years ago, I wrote an article analysing a discussion on BBC TV's Question Time programme which took place during the Israeli invasion of Gaza. Given this context, the programme's editors had made sure that the 5-member panel included two who could be relied upon to align themselves trenchantly on opposing sides of the debate, with the other three panellists cast as neutrals. Below is the gist of what I found.

During his turn, the pro-Israel panellist presented Israel's 2005 withdrawal from Gaza as a little theatrical scene in which Israel tells the people of Gaza that 'you' can have all these riches and 'we will even give you aid'- whereupon the dumb recipients of this magnanimous gesture respond with a barrage of rockets.

That the pro-Israeli panellist opposed a human, personal, reasonable Israeli side to a brutish, impersonal, unreasonable Palestinian side is no surprise. But it is instructive that many aspects of this same opposition, the same way around, emerged from the neutral panellists and even the pro-Palestinian panellist.

One of the neutrals (a UK cabinet minister at the time) began his turn by asserting "It's essential that Israel stops. It's essential that Hamas stops firing rockets into Israel". So far, so measured. He subsequently remarked that "if someone was lobbing rockets into your back garden, you'd probably want to respond". Fair enough. It is easier to understand a viewpoint when it is presented in a domestic, personal light. But the significant point is that this empathising with the Israeli perspective was not balanced by any remark empathising with the Palestinian perspective (e.g. that if someone had thrown you out of your back garden, you'd probably want to do something to try and get it back).

At another point, he observed that "a key question is: should Israel get rid of Hamas in the Gaza strip?" Again, this pondering of rational possibilities for the Israelis was not balanced by any consideration of the possible actions available to the Palestinians (e.g. should Palestine get rid of the settlements on the West Bank?).

Likewise, even the pro-Palestinian panellist, in her impassioned account of the position of the people of Gaza, failed to present them as people to be identified with. None became individuated in her argument and none was given a voice. The picture she painted was heartrending but barely human. Significantly, she supported her condemnation of the actions of the Israeli government by citing the opinions of two high-prestige Jewish groups and by asserting that the Israeli invasion was "not doing Israel any good" and "not diminishing terrorism". Just like the pro-Israeli and neutral panelists, she was engaging in a dialogue with, and offering advice to, the Israeli side, but not the Palestinian one.

One may argue that addressing the Israelis rather than the Palestinians was only to be expected because it was the recent Israeli invasion that was the trigger for discussion. But history shows that this approach is not inevitable. When the Soviet Union invaded Hungary in 1956 or Czechoslovakia in 1968, discussion in the west — though it likewise presented the Czechs, Slovaks and Hungarians as helpless victims — did not presume to offer advice to the USSR or dispute the wisdom of its actions. The USSR was understood to be not 'one-of-us', so there would have been no point. Similarly, no dialogue with Palestine can be found in modern European discourse. Palestine, it seems, is also not one-of-us.

No doubt the recognition of Palestine in the UN will have a positive, balancing effect in this respect. But recent TV sound-bites from the British Foreign Secretary suggest there is still some way to go. On 17 November 2012, in the context of the escalation of hostilities, he reported that the British government had emphasised the necessity of ceasing their air attacks "to the Israelis" and had also emphasised the necessity of ceasing rocket attacks — but "to the Palestinians" was missing. Two days later, he professed himself "pleased that Israel has held back [from a ground assault on Gaza] and also that the volume of rockets has fallen." So again, the Israeli side makes an appearance in his discourse as a decision-making agency, whereas Palestinian actions are represented by an agent-less, impersonal construction.

There are, of course, excuses for the Israeli prism through which European discourse is passed. Israel justifies military action as self-defence, implying that "no country in the world would not do as we are doing." That is, a legitimate government has the duty to protect its citizens; they are being attacked by outside agencies, so naturally steps are being taken to disable those agencies. In most European countries, both statehood and the integrity of state borders are taken for granted. Were either to come under threat, a decisive reaction would only be natural — and expected. The language used in discussing the Israeli-Palestinian conflict reflects how much easier it is for Europeans to identify with a community which already has a stable, workable state than to identify with one which does not. To the majority of Europeans, violence has a patina of validity when perpetrated by large, military groups on behalf of a viable state. It is doubtless regrettable and perhaps deplorable, but less deplorable than when perpetrated by individuals or small groups without uniforms — when it is usually seen as terrorism.

However, if Europe wants to make a positive contribution towards resolution of the Israeli-Palestinian conflict, this skewed vision, and the lopsided discourse to which it gives rise, must be corrected. The Palestinian side must be accorded the same everyday rational humanity routinely accorded to the Israeli side. Its representatives must not be portrayed as either terrorist monsters or innocent victims. They should be engaged with.

This article is based on O'Driscoll, Jim. 2009. "A Viable Israel and a Secure Palestine: Textual Intervention in a British Public Debate." In From Will to Well: Studies in Linguistics Offered to Anne-Marie Simon-Vandenbergen, ed. by Stefan Slembrouck, Miriam Taverniers and Mieke Herreweghe, 361-371. Ghent: Academia Press.