In the News — Metaphor 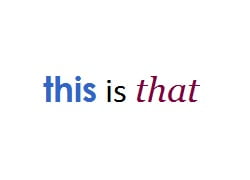 Metaphor allows us to talk about things in a descriptive or poetic way, and gives us a fresh way of thinking about something. Take Jacques' opening monologue in As You Like It - "All the world's a stage, and all the men and women merely players." This comparison of life to a play could inspire many different interpretations, perhaps giving us a powerful impression of our place in the world, or the brevity of life.

However, metaphors aren't merely a part of the language we use. They shape the very way in which we think. In Metaphors We Live By, Lakoff and Johnson discuss the example of arguments, which we often talk about as though they were similar to war — 'His argument was blown out of the water', 'They battled for hours', 'She won the argument'. They call these overarching metaphors — such as ARGUMENT IS WAR — conceptual metaphors. These 'organising' metaphors are so deeply embedded in our way of thinking that they seem quite natural to us. However, Lakoff and Johnson suggest that these conceptual metaphors are not beyond change — could life be quite different if, for example, we saw arguments through a conceptual metaphor of ARGUMENT IS DANCE?

When we stop to think about the influence of metaphor, we realise that it is inescapable, and extremely influential. How many relationships have ABBA ruined with their conceptual metaphor of RELATIONSHIPS ARE A GAME in 'The Winner Takes It All'? Use of metaphor in this way can have a profound ideological effect due to the ease with which we understand and take up new metaphors. Below are a few examples of metaphor gathered from the Language in Conflict Twitter feed. Think about how these metaphors affect our perception of the world around us. Can you think of alternative conceptual metaphors that might allow us to think about subjects in a different way?

These are just a few examples of how metaphor is used in conflict, and the reporting of conflict. Have you come across other examples of conceptual metaphors recently that may be particularly harmful or helpful? Share your ideas and thoughts in the comments section below.

To learn more about metaphor, visit Metaphor and Simile in the Linguistic Toolbox.