Language and the Syrian conflict 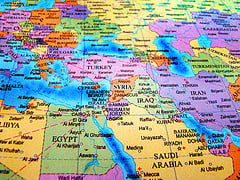 In the modern media, a conflict such as the on-going battle over the future of Syria generates a huge amount of press coverage and political reaction. The case of Syria is of particular note due to the continuing uncertainty surrounding a possible Western military intervention. The debate on such action is fraught, with a marked division between those in favour and those against. Those in favour of action draw on powerful arguments based on the apparent intractability of the conflict in Syria and the humanitarian crisis there, while those against point to the perceived negative results of recent Western interventions and contend that that more violent action might only exacerbate the conflict. With such strong differences in views, politicians have used particularly powerful language in order to try to persuade people of the correctness of one view or the other. This makes the debate an interesting one for linguistic analysis into the ideologies to be found in arguments and counter-arguments.

This article looks at a number of political uses of language in relation to the conflict in Syria, each of which is interesting in terms of 'hidden' ideologies. Each example has been contributed by a Twitter follower of @langinconflict, and is given a brief linguistic analysis using tools found in our Linguistic Toolbox. We hope that these small examples of linguistic analysis demonstrate the usefulness of such an approach in taking a critical look at political and media language, and welcome further examples or analysis in the comments section below and on our Twitter page.

John Kelly tweeted us to note a novel and ambiguous use of the term 'degrade'. The word was used by the American Secretary of State Chuck Hagel in his description of the possible nature of an intervention in Syria: "Our military objectives would be to hold the Assad regime accountable, degrade its ability to carry out these kinds of attacks and deter it from further use of chemical weapons". In this instance, 'degrade' would appear to represent an intriguing instance of naming: we might usually expect the verb 'degrade' to be used in the sense of something deteriorating naturally over time ('the quality of the photpgraph degraded over time'). However, in this instance, 'degrade' is used to describe an action performed on one party (the Syrian government) by another (Western forces): it seems an odd choice, as it appears to assume that Syria would be willing for America (and others) to perform this action, when presumably it would involve a degree of (military) force. Indeed, American officers and officials have noted that 'degrade' is not a standard military term, and that it is open to interpretation. 'Degrade', then, seems like an obfuscatory choice of word: a vague term that euphemistically covers for a potentially violent process.

The use of a classic form of rhetoric was noted by Edward Holmes, in American Secretary of State John Kerry's use of three-part lists. In his address on the 30th of August, Kerry used a three-part list to describe the chemical attack in Damascus as "This crime against conscience, this crime against humanity, this crime against the most fundamental principles of international community, against the norm of the international community". This list consists of three noun phrases placed in apposition — they are adjacent to each other, and refer to the same thing: the chemical attack. By using three separate phrases, Kerry emphasises the criminality of the attack. However, the use of a three-part list also suggets a sense of completeness: this is the complete picture regarding what happened in Damascus. This three-part list is in turn the subject of another structure that is used three times: "this matters to us. And it matters to who we are. And it matters to leadership and to our credibility in the world". Again, the list suggests that all the crucial elements are present — us, who we are and leadership. If it concerns all of these things, then it must be something that needs addressing. Note also the use of the inclusive second-person pronouns us and we, a means of naming that allows Kerry to bring the listener 'onside'.

The language used in the political reaction to Syria has received attention within the press itself. The following articles are of particular interest in the way they discuss the sorts of linguistic phenomena found in the Linguistic Toolbox:

Steven Poole's Guardian article on Obama's use of the phrase 'unconventional weapons' provides further discussion of the language of war.

Oliver Burkeman's Guardian article looks at the harm that can be done by 'bad' metaphors in war, concentrating on a US official's analogy involving a Cheerios-eating Assad.

The use of metaphor to persuade is discussed in Sarah Bakewell's Guardian article on metaphor and war.

Thanks to those who contributed their observations on language and the Syrian conflict.

Use the comments space below to add your own observations and thoughts, and get in touch with any observations or interesting articles that you think should be included in this article.